Finally, the English translation of this magnificent book is available for download exclusively on Twelvershia.net. May Allah bless the author Farid for his hard work and research and Hani for translating it for the English readers.

This eye opening book proves without a doubt the distortions and manipulation at the hands of the greatest Twelver Shia classical scholars whom they call “Shaykh Saduq, someone who narrated around 20 thousand narrations in Shia books. How can one take his religion from such a man? It is for the open minded Shias to think about! 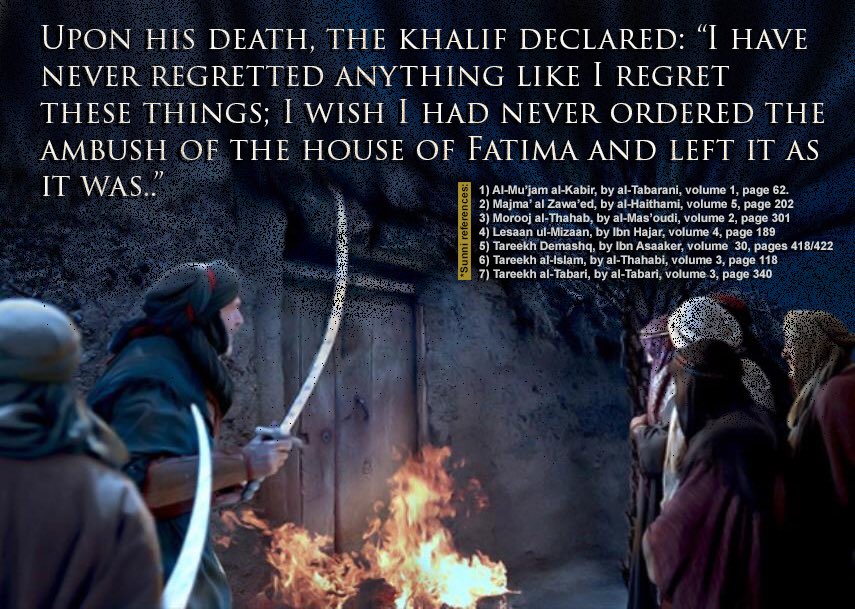 Farid‏ @Farid_BHR
An example of a Shia scholar quoting one hadith from MANY sources, when in reality they all go back to ONE weak narrator: Ulwan bin Dawud. END_OF_DOCUMENT_TOKEN_TO_BE_REPLACED

This issue has been brought up quite a few times in the past year, so it deserves a post.

Shias always quote this hadith from Fara’id Al-Simtain to prove that Sunnis believe that the Twelve Imams of Ahlulbayt are infallible and are appointed by Allah.

“Abdullah bin Abbas said: I heard the Messenger of Allah peace be upon him say: Me, Ali, Al-Hasan, Al-Hussain, and nine of Al-Hussain’s children are purified infallibles.”

However, upon returning to the chain of the hadith, these are the names we find:

As we can see, we have a group of narrators narrating from Abu Ja’afar Muhammad bin Ali ibn Babawayh Qummi aka Al-Saduq, the famous Shia hadith compiler.

The Shia editor, Mohammad Baqir Al-Mahmoodi admits this. He says:

“He (Al-Saduq) narrated this in the end of chapter 24 in Ikmal Al-Deen.”

In conclusion, this hadith that Shias have been spreading is from their books, and it is not a Sunni hadith.

Fara’id Al-Simtain can be found on this Shia site: http://alhassanain.org/arabic/?com=book&id=274

I was reading the book of Shia scholar Murtadha Mutahhari, which is “al-Seeratu al-Nabawiyya”. He lies, or copies the lie of his predecessors, upon Hadhrat Abu Huraira (r.a) in order to show him as a person who would fabricate ahadeeth (i.e the Prophetic traditions).

Here is what Murtadha Mutahhari says:

“When Abu Huraira was Muawiyah’s governor of Madina, a person came from Akka for selling onions in Makkah. No one bought it from him. He could not take the onions elsewhere and was ruining in the summer season. He went to Abu Huraira and said, “O Abu Huraira, can you do a good deed?” He said, “What kind of good deed?”. He said, “I am a Muslim. I had been told that there are no onions in Makkah, and the people of Makkah need it. I bought onions from all the money I had and brought the onions here. Now no one is buying it, and it is damaging. Can you help a believer? Abu Huraira said, “Alright, on the day of Friday, at the Jumma prayer, you bring the onions to a particular place, I will see what I can do. When all the people gathered, Abu Huraira said, “O people, I have heard from my beloved, the Holy Prophet (sallallaho alaihi wasallam) that he said, “Whoever ate the onion of Akka in Makkah, he will go to heaven.” Soon afterwards, the whole onion of that person was sold out. Abu Huraira was also satisfied that he had helped a believer and saved him from bankruptcy. Should the Prophetic traditions be used for such works? “

Murtadha al-Mutahhari, al-Seeratu al-Nabawiyyah, p. 122, published in 2000 (< Not to be confused with the early classical work Al-Seerat al-Nabawiya by Imam Ibn Hisham)

Where is this tradition found in the Sunni books? There is no evidence of it in the Sunni sources. But just to prove that Abu Huraira was a liar, the Shias lied upon him.

This reminds me of an authentic Shia narration, which shows that the Shia Imams permit their followers to lie upon those who they consider their enemies in order to promote their religion, and make the common people hate their enemies:

Imam Jaafar says that the Messenger of Allah (sallallahu alaihi wasallam) said, ‘When you after me find people of bid’ah and doubt/suspicion, do disassociation from them and increase your insults to them and accuse them of false things, and oppose them so they may not become greedy in bringing corruption in Islam. You must warn people against them and against learning their bid’ah (innovations). Allah will reward you for this and will raise you darajaat (positions) in the next life.’”

1- Muhammad ibn Ibrahim ibn Ishaq al-Taleqani – may God be pleased with him – narrated that Al-Hassan ibn Ali al-Ado’we quoted Ebad ibn Saheeb (ibn Ebad ibn Saheeb), on the authority of his father, on the authority of his forefather, on the authority of Ja’far ibn Muhammad as-Sadiq (as), “A man asked the Commander of the Faithful Imam Ali (as) about his medium height, big belly and lack of hair on his forehead. The Commander of the Faithful (as) replied, ‘The Blessed the Sublime God has created me neither tall nor short, but of medium height so that I can cut a short enemy into two pieces from head to toe, and cut a tall enemy into two pieces from his waist. My belly is big since the Prophet (saw) opened up to me a gate of knowledge from which a thousand doors to knowledge shall open up. Therefore, knowledge gathered up in my belly. And the reason why there is no hair on my forehead is that I have always worn a head armor and gone to fight with the enemy.”

2- My father (ra) told me and Muhammad bin al-Hassan (ra) they said: Ahmad bin Idris and Muhammad bin Yahya al-`Attar all of them from Ahmad bin Yahya bin `Imran al-Ash`ari with a connected isnad I did not memorize that Ameer al-Mu’mineen (as) said: “If Allah wishes well for his slave, he would strike him with baldness, and so I am(bald).”

So a shia said their belief has always been about 12 imam, but in reality, the idea of who would be the mahdi were not so clear by imam’s followers, let alone the no 12.

The confusion happened after every imam died. Fortunately all this was recorded by a 3rd century shia scholar al-Hasan bin Musa al-Nawbakhti in his book Firaq al-Shia. It all started after Ali’s death and it is repeated every time an imam passed away. When the 11th imam died, his followers were divided into 14 different groups, each one has their own unique opinions.

Luckily for shia, several centuries later under the iron fist of bloodthirsty Safavid dynasty, eventually the shia 12er belief reign supreme and became the most powerful of all shia sects.

“….Ali was not killed and he did not die. They said that he would not die until he has driven the Arabs with his cane and filled the earth with justice and fairness after it has been filled with oppression and injustice. This was the first sect in Islam which believed in waqf (imamate ended with Ali as hidden imam) after Rasulullah. They are also the first extremists. They are called Saba’iyyah, the follower of Abdullah bin Saba’ who publicly criticised Abu Bakar, Umar…“

“….he (Abdullah bin Saba’) was the first to declare that the imamate of Ali (AS) was mandatory…”

[The first people who hated Abu Bakar & Umar (ra) were the followers of Abdullah bin Saba the Jew, the same person whose existence many Shias of today try to deny]

[Hasan & Husein are followers of the true imam, Muhammad al-Hanafiyah]

“….he is called Abu Hashim and he is his father’s eldest son. His father appointed him as his successor….he is al Mahdi and he did not die….”

[Muhammad al-Hanafiyah’s son, not Hasan nor Husein as the next imam & Mahdi]

“….Abdullah bin Mu’awiyah is al Mahdi, who was mentioned by Rasulullah and his Ahlulbait and he will lead the world, to fill it with goodness and justice after it was filled with injustice and oppression. Then, when he died, he will leave his position to someone from Bani Hashim – from the descendant of Ali bin Abi Talib….”

[Imamate would be in the hands of Bani Hashim from Ali bin Abi Talib, not just exclusively to Husein’s progeny]

“When Abu Ja’far (AS) dies, his followers were divided into 2 groups. The first believed in the imamate of Muhammad bin Abdullah bin al Hasan bin al Hasan bin Ali bin Abi Talib who revolted in Madina and was killed there. He claimed that he was al Mahdi and he did not die….”

[Mahdi is Hasan’s progeny who was martyred in Madina]

“His followers (Ja’far al Sadiq) were divided into 6 groups…..Ja’far bin Muhammad did not die and he will not die until he revolts and rule the people and he is al-Mahdi….”

[Ja’far al-Sadiq is Mahdi, however after his death the majority of Shia’s scholars & respected figures believed in Abdullah, not Musa al-Kadhim as the next imam. After Abdullah died, they then followed Musa al-Kazim. Whatever happened to the so called hadith which mentioned all the 12 imam by names, did those shia scholars could not tell the difference between the name Abdullah & Musa?]

“….they denied the death of Ismail during his father’s life – saying it was a trick plotted by his father, who was afraid for him, so he hid him. They claimed Ismail would not die until he ruled the world and cared for the people and that he was al-Mahdi, because his father appointed him for the imamate after him….”

[The true imam was Ismail not Musa al-Kadhim]

“….Musa bin Ja’far did not die, nor will he die until he rules the world from east to west. He would fill it with justice after it had been filled with oppression. They claimed that he was al-Qaim al-Mahdi….”

[Imamate ended with al-Kadhim, did not continue after him. Ali al-Ridha and others after him were only al-Kadhim’s deputies, not true imam]

“….when Ali bin Muhammad bin Ali bin Musa al-Ridha (AS) died, a group from his followers believed in the imamate of his son, Muhammad, who died in Samarra during his father’s life…They claimed that he was al-Mahdi….”

“….his followers became fourteen 14 groups after his death. One group said that al-Hasan bin Ali is alive, but he disappeared and he is al-Mahdi, for it is impossible for him to die not leaving an acknowledged son….”

And we still hear shia said that their imamate belief is as clear as the sun. The belief which suppose to prevent the them from misguidance became the doctrine which misguide and confused shia, even their scholars during their imam’s life.

“If you were to closely study the books on the biographies of narrators, you will discover that most of the authors of the four-hundred Usoul have not received any praise or disparagement; this is either because their reliability and praise were established based on them being from the authors of the Usoul (…) Or because of the long period of time that sets them apart from the scholars who specialize in the condition of narrators…”

So their main Usoul books, the fundamental books of Hadith (fabricated) by the Koufans, are mostly unreliable due to the anonymity of their authors.